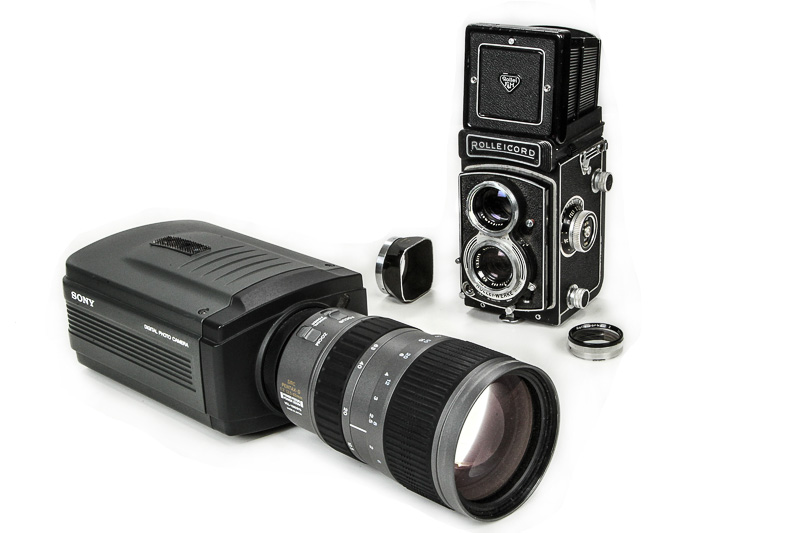 When my designers suggested that as part of this website I should write a blog I pondered for some time as to where to begin. I started my apprenticeship as a studio photographer almost 40 years ago and in the time that has passed a lot has transpired in my chosen profession.

Being a photography blog I decided to start with the one tool you must have. Some kind of camera. I have owned and still own many different makes and models of cameras but I decided on two special ones. My firsts.

My very first camera was a Rolliflex twin lens 120 roll film camera. This camera is experiencing a bit of a renaissance being used in retro photographs and I saw it recently on the box cover for Adobe Elements 12.

I started an apprenticeship in 1975 with Lorne Rostotski and he gave me one of his used ones. I still own and treasure it, although it’s been a few years since I’ve  shot any photos with my Rollei. Back in the 70’s, I shot and developed black and white medium format film with 12 exposures on each roll. It was tedious to develop film and then print photos from the negatives so every frame exposed was considered carefully as to its photographic intrinsic value.  Was the image worth the expense and work to complete.  Many times I set up to take photographs and after some contemplation decided against taking even a single photo. How times have changed.

And big change came in the late 1990’s. That’s when I got my first digital camera. It was a SONY Digital Photo Camera with a Pentax motion picture zoom lens. This was years before DSLRs were invented. It looked like a video camera and  was tethered to a controller box that was tethered to a computer. The computer monitor served as  viewfinder and you could only save a maximum of 9 images before having to download the 5 Megabyte files to your hard drive, a process that would take 15 – 20 minutes.  And it didn’t have a phone either.  Being an early adopter, when some people thought I had gone over the edge, opened up opportunities that I couldn’t have dreamed possible.  I was Beta testing equipment and software for a  St. John’s company, Telepix, who in the 90’s were trailblazing in the digital imaging world.  I was fortunate to work with a lot of very smart people who were imagining and writing software programs for the new age of photography.  I had industry innovators from all over the globe visiting my studio.  It was an exciting time in my career that turned my photography world inside out and upside down. Things were never going to be the same again.

Throughout my career I have captured images that I feel are important in my evolution as a photographer. Photographs that I am very proud of.  In future posts I will share some of those images and the stories behind the photos. Maybe there will be some more firsts.